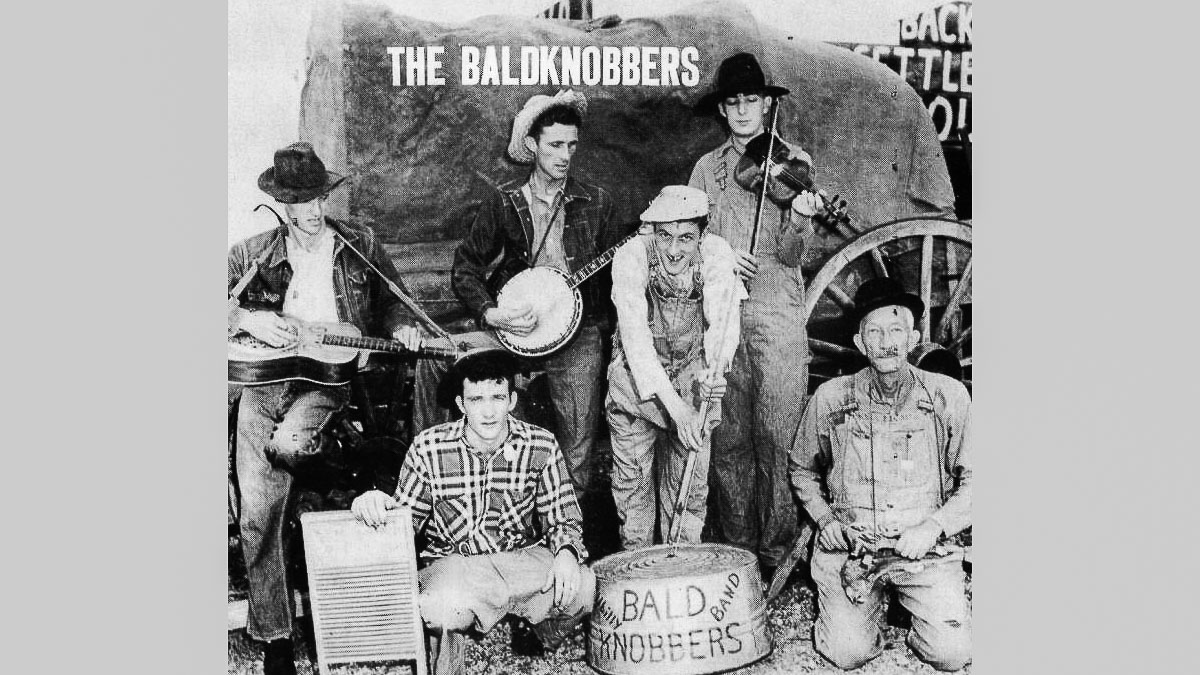 It has been 60 years since the Mabe brothers, Bill, Bob, Delbert, Jim and Lyle Mabe, started the original Baldknobbers Jamboree in 1959. The groups is accredited as Branson’s first show. Opening their sixth decade of shows in in Branson, the Mabes continue to entertain audiences now as Branson’s Famous Baldknobbers at the Branson Famous Theatre.

Baldknobbers through the generations

Through the generations, Mabe family members first names have changed, but the ebb of talent, music, comedy and love for entertaining people has continued to flow. Tim Mabe joined his dad Jim Mabe in the show more than three decades ago. Now in his 35th season with the Baldknobbers, it is a far from how he started, earning 50 cents to place bumper stickers on cars and a free coke to do some cleaning up.

“I was 23 when starting with the show in 1985,” Tim (alias Droopy Drawers, Jr.) said. “I worked in sales till about ’87 when I worked my way on regularly playing acoustic guitar. I took over in 1996 doing comedy for dad. I had the chance to work comedy a few shows here and there with dad after taking over for him in 96. That was my dream.”

When the Baldknobber Jamboree performed, there was no electricity to plug into. Actually, there was really no need for it since the instruments they played consisted of a dobro or flat-top guitar, the jawbone of a mule instead of drums, banjo, fiddle and a washtub bass, a washtub for rhythm and an acoustic guitar. There were also “hillbilly” names for the comedic characters they portrayed.

Baldknobbers start over 60 years ago

Most visitors to the Branson area came for fishing and camping. After a long day out on the lake, The Baldknobbers Jamboree provided live, evening entertainment. Then came Silver Dollar City, and Table Rock Dam where the Baldknobbers Jamboree was the featured entertainment. The Mabe brothers first appeared in Historic Downtown Branson at a talent show at Plumb Nellie Days in 1960. They still have the first place trophy they won.

“Dad and his brothers and sisters traveled around doing churches as the Mabe family way before then,” Tim said. “I know we performed on opening day of Silver Dollar City the fall of 1959 as the Baldknobbers, Then we started shows part time in 1960 at the downtown (community building) city hall.”

The Mabe boys were also in the Shepherd of the Hills theatrical production, playing four nights a week for the square dance segment of the play. The Mabe brothers’ show started attracting a larger audience so the Baldknobbers Jamboree moved its production to what became the first live entertainment theater in town – an old skating rink.

The first audiences ranged from a handful to nearly 100. In 1968 the Baldknobbers built their own theater on Highway 76. It had 1,500 seats. They moved to their present location in 2017.

Baldknobbers general manager, emcee and third-generation family member Brandon Mabe joined the Baldknobbers in 2006. He had been concentrating on sports and college, but he had musical talent for the stage. “My grandfather was one of the brothers that started the show in 1959. He was the original Droopy Drawers now my dad is Droop Junior. I grew up in a houseful of comedians,” he said. “One of my favorite memories was getting into my grandad’s suitcase and I would act like him before the show started.”

Tim’s wife, Patty Mabe, also joined the show in 2006. “I have worked for the family in all areas since 1992,” Patty said. “Brandon was just joining the show about then too.” In 2015 Branson married Megan McCombs who had joined the Baldknobbers as a singer a couple of years before.

There are 14 people who perform in the “Branson’s Famous Baldknobbers,” counting Murray who does the pre-show. There are four technicians working sound and lighting, Megan and Patty, who only performs in the new Gospel show on Wednesdays, make up half of the only four Mabes who still perform in the show.

“There’s only the four of us family members involved in the show now,” Tim said. “I have eight grandkids, four boys and four girls. All eight of them have already performed on stage at some point. But I do think there might be a couple of the boys that could take my place at some point if I can hold out that long.” Brandon, whose four children make up half of Tim’s eight grandkids, said even though his kids have performed at times, their school schedules make it difficult to be in the show full-time. And the Mabes have never “pressured family members to jump on stage to entertain.”

“During the 2017 Christmas season, my daughter Jalyn performed ‘Oh Holy Night’ for our audiences,” Branson said. “I was a pretty proud daddy watching my, then 10 year-old, daughter sing on stage. I am hopeful for many more memories to be made watching them perform. If this is the path they choose, they will absolutely have the opportunity to perform one day.”

In 2011 the Mabe brothers original costumes, instruments and artifacts were added to the permanent collection of the Smithsonian’s National Museum of American History. Tim said it means a lot to the family and was a tribute to his dad and uncles to have items they used included in the Smithsonian collections.

The Baldknobber’s show also remains a tribute to their roots. Its line-up includes a tribute to veterans, Gospel music, comedy and country music as it was then – but also as it is now. “We do a little bit newer style of country music that they did in 1959,” Brandon said. “But I don’t think you can become more Ozarks, or more Branson, than what we do in our show. It is who we are.”