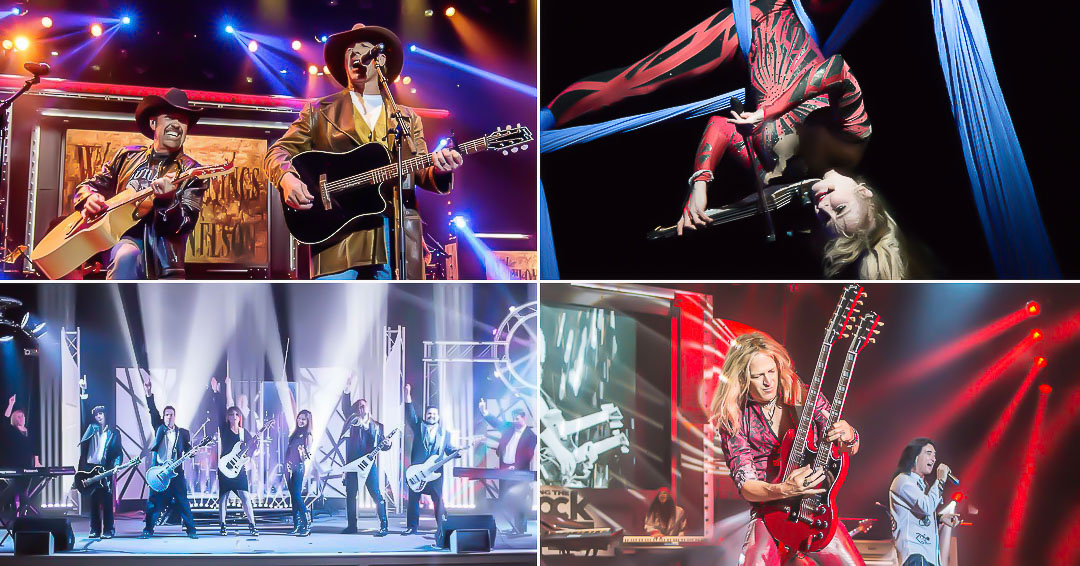 Starlite Theatre’s announcement of its entertainment line-up for 2018, at a special press conference on November 29, indicates it will be reaching new heights of entertainment excitement! In referring to the 2018 lineup, Sir Harry Cowell, producer and operator of the theater, said, “This promises to be a very exciting year!”

New to the Starlite in 2018 will be the “Janice Martin Cirque Show.” Performing primarily morning and afternoon shows, this magical musical and aerial extravaganza features the world’s only acrobatic aerial violinist, Janice Martin. The show won 2017 Branson awards for “Matinee of the Year” and “New Show of the Year” with Janice winning “Female Entertainer of the Year.” The integration of the Starlite’s “fabulous lighting, sound, staging, and screens” into the show will make an already amazing show even more so.

Raiding the Country Vault, featuring an all-star cast, performing the biggest classic country hits, will again entertain Starlite audiences in 2018. The show uses a concert format and “star performers, many of whom performed with the bands famous for the music.” Simultaneously, with each classic performance, the story of the artist and song is shown on large LED screens which, coupled with the Starlite’s state of the art sound lighting, and laser systems, provides a unique awesome entertainment experience.

After an extremely successful Branson run in 2017, Raiding the Rock Vault, will be returning to the Starlite for three limited engagement performances, 16-19 May, 18-21 July, and 10-13 October. The all-star cast of this show includes performers from Asia, Tracii Guns, White Snake, Heart, Bon Jovi and more.* Narrated and sung along with compelling imagery including historical footage, Raiding the Rock Vault transports the audience on a magical musical journey from 1960 to 1990, with classic anthems from The Rolling Stones, The Who, The Doors, Led Zepplin, The Eagles, Jimi Hendrix, and others. It’s been the #1 show in Las Vegas for four years, just recently celebrated its 1000th performance, and brings a new dimension of excitement, music, and energy to the Branson stage.

Buckets N Boards, a huge family favorite in Branson, and one of the most requested shows for Disney Cruise Lines, will be returning to the Starlite Theatre for Spring Break in March and throughout the summer season. This percussion style comedy show is “performed by two of the most talented performers in Branson” and simultaneously provides a great entertainment experience for all members of the family.

The ever-popular Larry’s Country Diner will be returning to the Starlite for a limited run in September. It features some great guest stars including, Rhonda Vincent, Gene Watson, Jimmy Fortune, T Graham Brown, and the Malpass Brothers.

Two new shows will highlight Ozark Mountain Christmas at the Starlite Theatre in 2018. Classic country and traditional Christmas music will come together in a special celebration of Christmas in the Raiding the Country Vault Christmas show during November and December of 2018. The show incorporates all the production, stars, and features of Raiding the Country Vault, and will be a special classic country Christmas blessing. In addition, The Prophecy, a Trans-Siberian Orchestra style show, will provide an “electrifying evening of the world’s best holiday style rock show,” featuring magnificent lighting, costumes, and lasers for a two-week limited engagement during November.

“We are just so excited about the awesome line-up of entertainment we have for 2018,” said Renee Johnson, the assistant manager of the Starlite Theatre. With a wink, she added, “There just may be a few more surprises!”

* Performers from these groups will differ from engagement to engagement.